For motorsports fans there’s no sweeter sound than the high-revving engines of Formula 1 cars. And for those attending the Rolex Monterey Motorsports Reunion August 12-15 at Mazda Raceway Laguna Seca, there will be plenty to see and hear as 38 historic F1 cars will take to the grid to celebrate the 60th anniversary of Formula 1.

“The first world championship Formula 1 race was held at Silverstone in 1950 and for this year’s Rolex Monterey Motorsports Reunion, we wanted to celebrate the 60 years of Formula 1 history with a featured race,” explained Gill Campbell, CEO/general manager for Mazda Raceway Laguna Seca. “Dan Gurney, the only American to build and win in a Formula 1 race in a car of his own construction will be on hand to help us pay tribute to the beautiful and history-laden grid of Formula 1 cars.”

On the grid will be one of the most radical entries ever to succeed in Formula 1 competition. The 1976 Tyrrell P34 ‘six-wheeler’ used four, tiny 10-inch wheels and tires at the front and two ordinary sized wheels in the back.  The idea of the smaller front tires was to increase air penetration and have a smaller ‘frontal area’ to reduce drag.  Driver Patrick Depailler debuted the car and with team-mate Jody Scheckter earned one win and several high place finishes.

No historic F1 race would be complete without a few of Colin Chapman’s revolutionary cars. The 1976 Lotus 77, known as the John Player Special MK II, driven by Mario Andretti to victory at the Japanese Grand Prix, will be on track along side the 1967 Lotus 49. The Lotus 49 was the first Double Four Valve powered car in F1 with an engine that not only was revolutionary; it started the Ford/Cosworth relationship. Driven by Jimmy Clark, it won its debut race at Zandvoort. This was the first F1 race car that had sponsor liveries.

The red team from Modena, and F1, are two names that will forever be entwined with each other as Ferrari is the oldest surviving and the most successful F1 team in Grand Prix racing.  Fans will experience the 1969 Ferrari 312 driven by Chris Amon and Pedro Rodriguez, the 1970 Ferrari 312B driven by Jacky Ickx which was the first F1 car from the Scuderia with the ‘boxer’ engine (flat 12 cylinders), and the 1980 Ferrari 312T5 which was driven by Jody Scheckter and Gilles Villeneuve. The Ferrari 312T series won 27 races, four constructers’ and three drivers’ championships.

The Rolex Monterey Motorsport Reunion is honoring one of the true legends of motorsports- Dan Gurney who is one of five Americans to have won an F1 race. Additionally highlighting the 19 race groups will be a dedicated grid of 40 Bugatti race cars in the Bugatti Grand Prix, a featured race for Trans-Am; and for the first time ever, Stock Cars (with drum brakes) that competed between 1959 and 1975.

Wed May 13 , 2020
PRE-REUNION OPEN TO SPECTATORS FOR THE FIRST TIME 02/09/2010 Automobile enthusiasts worldwide will have more to look forward to and experience at Mazda Raceway Laguna Seca as officials announced that the Pre-Reunion on August 7- 8, 2010, which is normally closed to the public will be open to spectators. The […] 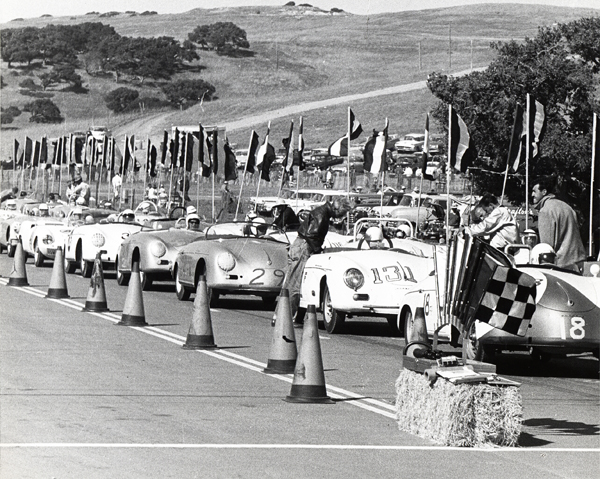