With Chevrolet’s Corvette as its honored marque this year, the Rolex Monterey Motorsport Reunion is celebrating an American sports car legacy over three action-packed days that cap off the Monterey Peninsula’s annual Classic Car Week.  A total of 45 Corvettes are racing among the Reunion’s 550 historic automobile entries, which are racing in 16 groups and representing nearly every era of sports car racing.In addition, the Corvette Heritage Display features a collection of the most important cars in Corvette’s evolution, starting with a 1954 car from the earliest “generation 1” and endi ng with the soon-to-be-introduced 2014 Corvette Stingray C-7. If that’s not overwhelming enough, 350 Corvettes occupy a club corral and “Stingray Island” features eight rarely seen Corvettes, including the Mako Shark Corvette and Manta Ray Corvette concepts.

For such an eclectic gathering of Corvettes that also falls on the 60th Anniversary of the marque, it follows that an abundance of luminaries—both associated with Corvette and not—are interacting with drivers, owners and fans throughout the long weekend.

“As we stand here and look around at all these Corvettes, we really see the evolution from the prospective of design, technology and relevancy,” said General Motors Vice President of Global Design Ed Welburn before he jumped into the lead Corvette for the Quail Run with celebrity car collector and long-time Reunion fan Jay Leno, who drove. (The traditional drive – this year with 20 Corvettes participating — takes the featured marque cars from Mazda Raceway Laguna Seca to another Classic Car Week event, The Quail, a Motorsports Gathering, 12 miles away.)  “You can see how the Corvette has evolved from a very basic sports car that was really cool but real seat-of-the-pants to drive.  To see the development of the model from generation 1 to generation 2, then generation 3 and 4 and up to what we have now with the awesome 2014 Corvette Stingray C7, it is amazing.

“When you leave the Corvette area and walk around the rest of the paddock, you see all these incredible race cars from the past.  For me it is incredible, because I look around and see the cars that all my heroes drove; they’re all here today.  I feel today how I felt when I was an 11-year-old kid.”

Welburn added that the heart and soul of Corvette is motor sports, and it has an influence on the design team, the engineering team and ultimately the owners of the cars. “They feel it,” he said.  “Many of our customers may not know much about motor sports, but they know that Corvettes have a soul and a heart, but the heart pumps on racing.  I think we will all see evidence of that this weekend at the Rolex Monterey Motorsports Reunion. “

Richard Ravel (San Jose, Calif.) is one of those drivers here whose heart pumps on racing, and he is especially fond of Corvettes.  He drives his good friend Charlie Elman’s (Los Altos, Calif.) polo white 1954 Corvette, the oldest Corvette that has ever raced at the Rolex Monterey Motorsports Festival, in Group 5B for 1947-1955 Sports Racing and GT Cars.

“We’ve raced it here for 30 years,” said Ravel.  “We started racing it here in 1980, but in 2009 Charlie wanted to retire the car.  Because this year the event is honoring the 60 years of Corvette, I convinced him that it would be good to bring it back just one more time.”

“I bought the car in 1976,” said Elman. “It’s a two-speed automatic transmission, so it was never a race car; those cars that might have raced were heavily modified. Since downshifting and upshifting are an important part of maximizing power to the drive wheels as well as slowing the car through tight turns, an automatic transmission is never a good option for race cars.”

Ravel added that after two or three years of racing the car, he happened to be at an event and sat down next to Zora Duntov (who created the Corvette).  “We discussed the car for about a half hour. Of course he knew this car inside and out. What he told us was that in order to downshift this thing, since the transmission is bulletproof, we should simply put it in neutral, blip the throttle, and jam it into low. The car has drum brakes all around, so slowing and stopping is this car’s nemesis.   When you’re at speed and you step on the brakes, you know it’s going to pull to one side or the other; you just never know which side it’s going to pull to.  So what I do is pump up the brakes, get a sense which side it is going to pull to, set up the car and drive it through the corner.  We made some modifications so we’ll see soon how they work out!”

Other Corvette-centric activities during the Rolex Monterey Motorsports Reunion include a “Picnic in the Park,” featuring Corvette Racing team’s Tommy Milner sharing “untold” stories of memorable racing moments with three-time Formula 1 World Champion and Rolex Testimonee Sir Jackie Stewart; autograph sessions with Dick Gulstrand, better known as “Mr. Corvette” for his involvement in developing, racing and promoting the marque, and Peter Brock, one of the youngest designers ever hired by GM; and a Corvette Race Car Show where all the Corvette race cars will gather with owners and drivers for one-on-one interaction with show attendees. 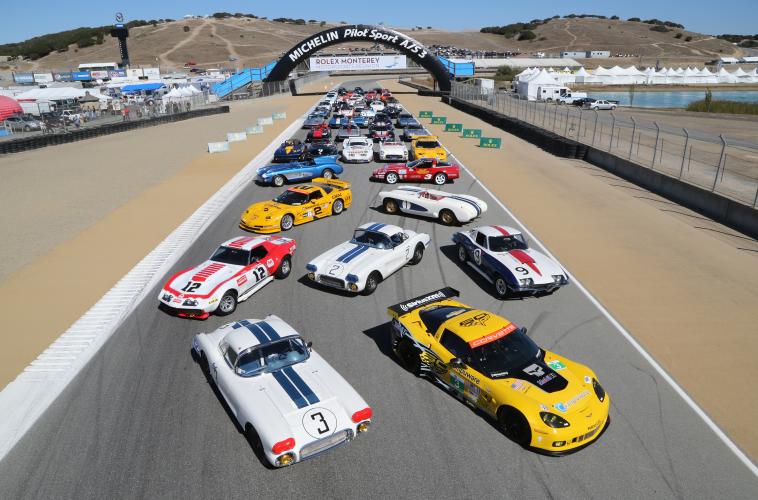