An example of arguably the most famous and sought-after classic race car ever – the 1962 Ferrari 250 GTO – will be previewed by Bonhams at the Monterey Pre-Reunion August 9 and 10. The classic race car, of which only 39 were constructed, will be shown in the Bonhams hospitality area at Mazda Raceway Laguna Seca where the historic car racing is taking place.

The Ferrari, chassis number 3851GT, is from the Maranello Rosso Collection and has been in one family’s care for the past 49 years. Bonhams will sell the car and nine other Ferraris from the collection at its Bonhams Quail Lodge Auction August 14.

“Collectors around the world are eagerly awaiting auction day to see what the market will command for such a historically significant and rarely available automobile,” said Mark Osborne, head of motoring for Bonhams in the U.S. “There is no reserve on this car, meaning that it will be sold to the highest bidder regardless of what that bid is. And what better way to showcase it than in front of racers and collectors who are at the Monterey Pre-Reunion.”

This car was the 19th Ferrari GTO to be completed. Since two of the preceding examples had been 330 GTOs with 4-litre engines instead of the GT-homologated 3-litre ‘250′ units it may be regarded as the 17th 250 GTO. It was collected by its first owner, the experienced and rugged 34-year-old French privateer Jo Schlesser, who immediately entered it in the 1962 Tour de France Automobile, with co-driver French skiing champion Henri Oreiller. The duo covered 3,418 miles and finished second overall.

Bonhams returns to the Monterey Pre-Reunion for the fifth consecutive year showcasing auction cars at its Turn 4 chalet in the race paddock. Several other cars will join the Ferrari 250 GTO for visitors to inspect before they go on final display prior to the auction beginning.

“We are thrilled Bonhams has selected the Monterey Pre-Reunion to preview this superb race car to our guests,” said Gill Campbell, CEO and general manager of Mazda Raceway Laguna Seca. “It is a privilege to be working with Bonhams on enhancing the experience for our drivers and wish them great success in the auction of these very important cars.”

Admission to the Monterey Pre-Reunion August 9 and 10 is just $20 at the paddock entrance of Mazda Raceway Laguna Seca. Advance purchase tickets for the Rolex Monterey Motorsports Reunion August 14-17, featuring 550 historic race cars and the centennial of Maserati, are still available.

Mon May 18 , 2020
Hospitality packages provide one of the best ways to enjoy the Rolex Monterey Motorsports Reunion in comfort and style. See 550 historic race cars competing wheel-to-wheel like they once did in their respective era, such as the thundering Trans-Am cars and high-revving Formula 1 cars, from the comfortable confines of […] 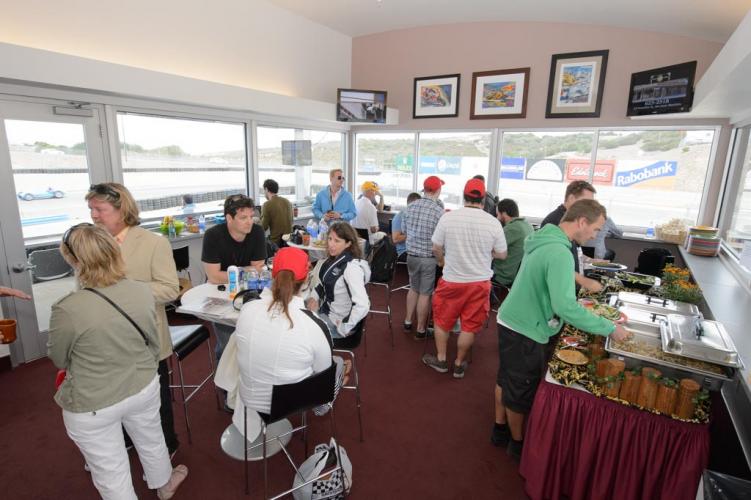