Legendary musician Nigel Olsson, a driving force behind the music of superstar entertainer Elton John since the 1970s, will be the driving force as a pace car driver for the Rolex Monterey Motorsports Reunion featuring the 60th anniversary celebration of Mazda Raceway Laguna Seca.

Described as a museum springing to life, the Rolex Monterey Motorsports Reunion, Aug. 17-20, is the largest event held during the famed Monterey Classic Car Week, and is the only event where cars are doing what they were originally intended to do … race. Approximately 550 race cars are invited to compete in the world’s premier motoring event and are accepted based on the car’s authenticity, race provenance and period correctness. Formula Junior will be celebrated across two run groups at the Reunion during their 60th anniversaries, and the 70th anniversary of Ferrari will be recognized.

Olsson will provide hot laps for Rolex guests and other VIPs throughout the weekend. He is a longtime motor racing enthusiast and has competed and served as a pace car driver for the Historic Motor Sports Association (HMSA), which provides the technical scrutineering and on-track coordination for the Rolex Monterey Motorsports Reunion.

Olsson has been behind the drum kit for more than 2,000 Elton John concerts, including the 2,000th show in St. Petersburg, Russia, on Nov. 9, 2014. In addition to his long tenure with John, he is a sought after session musician who has also composed, recorded, and produced his own solo albums.

Q: How was the tour?
A: We were out for eight weeks in Europe. It was a really intense tour. We had a great time. It takes a little while to get back to where I am up and I know where I am. I’m relaxed, and I’m really looking forward to coming to the Rolex Monterey Motorsports Reunion this month.

Q: How many times have you been to the Rolex Monterey Motorsports Reunion? What keeps you coming back?
A: I’ve been there probably 10 times. Obviously, getting to drive on the track is a lot of fun. I’ve been able to meet lots of different people. I love the event. It’s for anybody who enjoys cars or motor racing, and it’s in an area that’s so beautiful. It’s a wonderful event that provides enjoyment for the whole family. I love being on that track as it’s one of my favorite tracks in the whole world. I come out there and enjoy being part of the extravaganza.

My job on stage is to make people happy. With all the things going on in the world today, it’s nice to look out and see people smiling. When I come out at the track, it’s the same thing. People are walking around having a good time and enjoying the world as it should be, basically.

Q: Having been all around the world, what do you enjoy about the Monterey Peninsula in particular?
A: It’s a beautiful place. I love being close to the sea and the beautiful places to visit while you’re up there. It could be a National Park. It happens to have a beautiful race track thrown in. It’s just a great feeling to be there. I like to come out there with my wife and my family. It’s a great place for relaxation or enjoyment.

Q: What will you be driving to the track?
A: I have a Fiat Abarth 500. I’m going to drive it up from L.A. up the coast. It’s pretty tricked out, this little thing. The only time I get to drive it long distance is when I either come to the race or to do our shows in Las Vegas. Other than that, it’s parked in my garage. I’m looking forward to driving the pace cars that are obviously from the Mazda line. They’re great cars to drive. The pace car team is very professional. When we take people for rides around the track, we give them a thrill. I look forward to it. It’s going to be great. 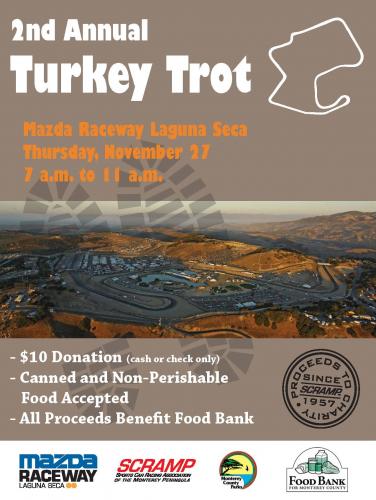