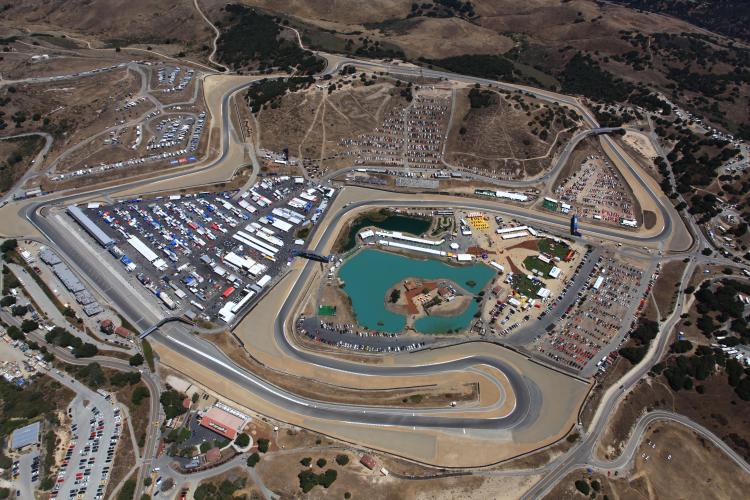 The Monterey Peninsula’s love affair with world-class racing traces its beginnings to the inaugural running of the Pebble Beach Road Races in 1950. Those sports car events quickly outgrew the public roads of the Del Monte Forest and a beautiful new road racing facility was born on November 9, 1957.

The earliest development of the local area occurred in 1867 with the founding of the nearby Laguna Seca Ranch, which has operated continuously for 140 years with grazing and equestrian uses.

The track was built in 1957 at a cost of $1.5 million raised from local businesses and individuals on part of the US Army’s Fort Ord (a maneuver area and field artillery target range) after the nearby Pebble Beach Road Races were abandoned for being too dangerous. In 1974, the property was deeded over to the Monterey County Parks Department and continues to be part of the park system to this day.

The track itself has undergone significant changes over the past two decades to meet evolving safety homologation requirements of the Fédération Internationale de Motocyclisme (FIM), Fédération Internationale de l’Automobile (FIA) and other sanctioning bodies. Changes include the addition of the entire infield area in 1988 (present day turns 3, 4 and 5, eliminating the straight that started at present day Turn 2 and ended at present day Turn 5) extending the track from its original 1.9-mile length to its current 2.238-mile length, plus the relocation of pedestrian bridges and embankments, and the expansion of gravel pits for additional runoff.

The original media center was demolished in 2006 and replaced by the Red Bull Energy Center, a modern entertainment facility with commanding views of the facility.

Perhaps one of the most famous moments of racing took place at the Corkscrew when Alex Zanardi passed Bryan Herta on the inside of the Corkscrew on the last lap of the 1996 CART race to take the victory.

Mazda Raceway Laguna Seca is an 11-turn, 2.238-mile jewel of a road course on California’s beautiful central coast. While the track is a favorite of racers and fans worldwide, many focus on one specific section—officially Turns 8 and 8A—or more commonly known as The Corkscrew.

The Corkscrew is a one-of-a-kind turn in motorsports. Here’s what makes the hard-left, hard-right combination so spectacular:

Stirling Moss won the first Pacific Grand Prix and was the only two-time winner.

Steve McQueen was entered in a Formula Junior race until his Cooper had serious engine problems and he could not start the race.

1963 – Jim Clark made his only appearance at Mazda Raceway Laguna Seca with the Arciero Bros. Lotus 19 and led the USRRC Championship road race until he had to pit with steering and brake problems after 31 laps.

Phil Hill gave Chaparral its only victory in the Can-Am series here.

1973 – NASCAR came to Mazda Raceway Laguna Seca for the Grand National West Tour. Mark Donahue was the winner of the last Can-Am race.

1974 – Kenny Roberts riding a Yamaha scores the first of his many wins at Mazda Raceway Laguna Seca in the Kawasaki Superbike International.

1981 – Mazda Raceway Laguna Seca hosts its first NASCAR race with the Winston West and has Bobby Allison on the grid. Paul Newman races in the Monterey Triple Crown in a Datsun Turbo.

1983 – The first CART Indy Car race was held with Teo Fabi winning in a March-Cosworth. Kenny Roberts, Eddie Lawson, Mike Baldwin and Randy Mamola, four motorcycling legends at the top of their game and on equal machinery, race together at the champion Spark Plus 200.

1988 – The track was lengthened from 1.9 to 2.214 miles and then to 2.238.  The change was accomplished by creating two more turns, carrying the track into the lake area and back out to rejoin the old course at what is now Turn 5. The straightaway was lengthened from Turn 11 to the start/finish line. This was done to accommodate the International Motorcycle Grand Prix.

1988 – USGP returns to the U.S. after a 20-year absence and the first USGP at Mazda Raceway Laguna Seca. The race was won by Eddie Lawson who was riding against Kevin Schwantz, Wayne Rainey, Mike Baldwin and Randy Mamola.

1989 – Wayne Rainey won from pole in his first of three USGP wins in a row for him at Mazda Raceway Laguna Seca.

1990 – Wayne Rainey’s second consecutive win at the USGP at Mazda Raceway Laguna Seca helped propel him to his first of three World Championships in 1990.

Sidecar road racing hit a high point with the inclusion of the World Championship for sidecars at the USGP. The sidecar engines were limited to 500 cc two strokes. Seen in person, the three-wheeled marvels were big fan favorites as they negotiated the circuit.

1992 – Michael Andretti wins his second Indy Car race at Mazda Raceway Laguna Seca and Mario Andretti was third, making it the second year in a row that both Andretti’s were on the podium.

1995 – The track hosts the World Superbike Championship (WSB) for 10 successive years. The first American rider to win WSB at Mazda Raceway Laguna Seca was John Kocinski who took victory on a Ducati in 1996.

1996 – On the last lap of the CART race, Alex Zanardi overtook Bryan Herta in The Corkscrew with an unprecedented and unforgettable move now known as “The Pass.”

2004 – The last time for a World Superbike race when Australian Chris Vermeulen scored a double win.
After the season ended, numerous track modifications were done including the widening of turns 9, 10 and 11 to accommodate MotoGP.

2005 – MotoGP returns to Mazda Raceway with American Nicky Hayden winning the race and then taking is father around the track on the back of his bike.

This year also marks the first time that the Rolex Grand–Am Sports Car Championships is at the track.

2008 – At the Red Bull U.S. Grand Prix, Valentino Rossi overtakes Casey Stoner in The Corkscrew to win the race. It is very similar to Zanardi’s pass. It is Rossi’s first win in the U.S. and he celebrates by kissing The Corkscrew in front of 150,000 screaming fans.