When Carroll Shelby, along with chief engineer Phil Remington, finished the very first Cobra, neither imagined that history was being written. Shelby just wanted to go race and win…right away, but Shelby American’s incredible efforts between 1962 and 1967 resulted in 998 Shelby Cobras being constructed. It’s estimated that 120 of these Shelby Cobras were competition cars, and they forever changed sports car racing.

The Rolex Monterey Motorsports Reunion, August 17-19 at Mazda Raceway Laguna Seca, celebrates the life of Carroll Shelby, 1923-2012, and honors the 50th anniversary of the iconic Shelby Cobra with a variety of activities, but none as spirited as the dedicated Shelby Cobra race. An impressive grid of 45 authentic series CSX 2000 and 3000 Shelby Cobras will take the green flag for their gentlemanly race, where winning is not necessarily the objective for each driver; however, “being there” is everything.

The Shelby Cobras will be arriving from the United Kingdom, Switzerland, Canada and across the U.S. to participate in this special occasion. Each car that has been accepted is based on its exceptional racing provenance, mechanical authenticity and period-correctness in appearance. The Governing Committee pored over nearly 60 entries before shaving the list to 45, the maximum number safely allowed in any one group.

But the Cobra celebration doesn’t end with the checkered flag. More than 200 Shelby Cobras are expected to arrive in the Cobra Corral. There will be areas for CSX 2000/3000 cars and Shelby American continuation cars. Being the most replicated car of all time, replica Cobras are also welcome in the Cobra Corral for display and camaraderie among automotive enthusiasts.

The Shelby Cobra group is one of 17 race groups highlighted this year. Nearly every era of race car will be represented, from a 1907 Renault Vanderbilt Cup car in Group 1A’s pre-1940 sports and racing cars to a 1990 Ford Thunderbird running in Group 8B’s 1974-1990 Stock Cars with disc brakes, which is a new group this year.

A longtime partner of Carroll Shelby, Ford Motor Company is fully engaged to present fans with a heritage display that celebrates the iconic Shelby Cobra. The display will be the highly anticipated centerpiece of the race paddock.

Tue May 12 , 2020
Carroll Shelby MAY 11, 2012 It is with a heavy heart that we report the passing of auto and motor racing legend Carroll Shelby, who died Thursday night at Baylor Hospital in Dallas. He was 89 and the longest living double transplant recipient. The Mazda Raceway Laguna Seca family will […] 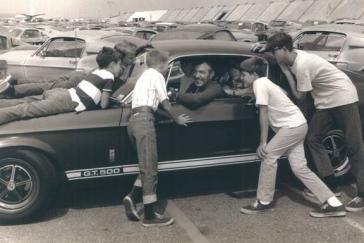