Over the years, Mazda Raceway Laguna Seca and its Corkscrew have taken on an almost mythical status in the world of racing, despite the fact-or perhaps because of it-that the circuit wasn’t the creation of a famous designer like Hermann Tilke. Instead, the track was the brainchild of a humble Salinas architect named Wallace Holm and his Equipment Operator, Jerry Blair. Holm is no longer with us, but track’s PR manager, Jennifer Capasso, recently tracked down Blair and asked him to recall the process of creating a legend.

The impetus for building the track came when the Pebble Beach Road Races-a popular 1950s car event-were declared too dangerous and were discontinued in 1956 (Blair attended the last one). Lou Gold (the first president of the Sports Car Racing Association of the Monterey Peninsula, which still operates the track) got in touch with an Army General who was stationed at nearby Fort Ord and who was an avid race fan. A deal was put together, and Holm was called in to put together a dedicated race circuit on the fort’s land.

In 1974, the property would be deeded to the Monterey County Parks Department, but back then, there was never any doubt whose land they were on. Blair remembers there being clear signals as he and the construction crew would drive onto the property via South Boundary Road (the main entrances off Highway 68 were not yet in existence): Rifle-toting military guards posted in what Blair called “outhouses” would stop them for questioning, and they’d see recruits going through basic training, setting of ammunition and explosives on the lakebed.

Blair says that when they were laying out the track, two bulldozers set out, the first one carrying not only the equipment operator, but “Wally” Holm, dressed in a white shirt and a suit, hanging off and pointing the way: “Go this way,” or “Go that way,” he’d call out. Holm followed the natural lay of the land and even utilized a couple of existing dirt roads-which had been cut in by the military with graders-for the actual track.

It’s tempting to imagine the Corkscrew being the creation of a genius, but to hear Blair tell it, there was really no other choice, considering the terrain and the location of the oak trees that surround it: “On the dozer, it was the only way to go,” he said simply. “You’ve got to get down. Just look at the pictures-it’s easy to see why we drove the dozer that way and cut the track.”

Once the layout was finalized by the bulldozers, scrapers followed them, and then earth movers made cuts and fills as necessary. For the most part, the track was made of base rock and asphalt-so well was the natural terrain utilized that not much fill-dirt had to be brought in from outside. A steamroller smoothed it all out, and to pack down what’s now known as the Corkscrew (Blair isn’t sure who named what he calls simply “the hill”), he had to run the dozer backward, in its super-low reverse gear.

The circuit has always had a strong local connection, and that was true even back then. The track’s base rock came from Pine Canyon Quarry, off River Road in Salinas, while the asphalt came from Monterey. The entire track was built in just a few months at a cost of just $1.5 million (raised from local businesses and individuals) by a crew of twelve to eighteen workers.

Surprisingly, Blair claimed that the biggest challenge faced in preparing for that debut 1957 race had nothing to do with the actual track. “It was figuring out where to park the fans!” Blair said. (The Wolf Hill and Lookout Ridge parking areas were obviously not yet in existence, and what is now Yamaha Marketplace was then just a bump-filled bog.)

In addition to the Corkscrew, the track is known for its high-speed, crested Turn 1, but the original layout also featured a white-knuckle Turn 2-a bending left that sent the riders hurtling around the small lake for which the venue is named, and into what is now Turn 5. Veteran racers like Randy Mamola remember that old Turn 2-3 combination fondly, and the car guys eventually got to the point where they could do the section without lifting. The first one to pull that feat off was Teo Fabi, a former Formula 1 driver who raced Can-Am for Paul Newman and who had a shop at the track (in the current Skip Barber building). That meant Fabi had plenty of track time, but Blair says it still took him three weeks to work up to it.

When Grand Prix road racing came to Monterey for the first time in 1988, the track had to be lengthened in order to receive FIM homologation, and what is now the entire infield was added, necessitating the conversion of Turn 2 into its current hairpin design in order to route riders inside the lake. According to Blair, the “new” Turn 2 was designed by another local legend-none other than three-time world champion Kenny Roberts, who is from nearby Modesto and whom Blair refers to as a “gentleman.”

At first, the plan was to retain the original layout as well and use it for cars, but CART legend Mario Andretti was at the track testing in 1987 and asked if he could run the new layout-despite the fact that there were no safety barriers on the new sections. Andretti drove his racecar around for a few laps at speed, terrifying the officials as he screamed through Turns 3 and 4-right next to the SCRAMP offices (which were in the location of the current souvenir store). “It sounded like he was about to come racing through the lobby!” Blair said.

When he came to a stop, Andretti climbed out of his car: “We’re running this configuration at the next race,” he declared.

Blair is a lifelong racing fan, and over the past half-century-plus, he has attended many, many races at the circuit he helped build. When Capasso showed him a photo of Alex Zanardi’s famous 1996 pass [http://www.youtube.com/watch?v=LB_k_wlr5Bc] on Bryan Herta through the Corkscrew, he said, simply, “Zanardi had huevos.” Blair once attended the Jim Russell Racing Drivers School at the track in a Formula Ford, and he put in countless laps around the track in his old El Camino work truck.

You might think being one of the main men behind such a legendary track would give one a big head, but Blair is as modest as ever. “We didn’t know that Laguna Seca would be such a big deal,” he said. “All we knew was that we could no longer race in Pebble Beach.” 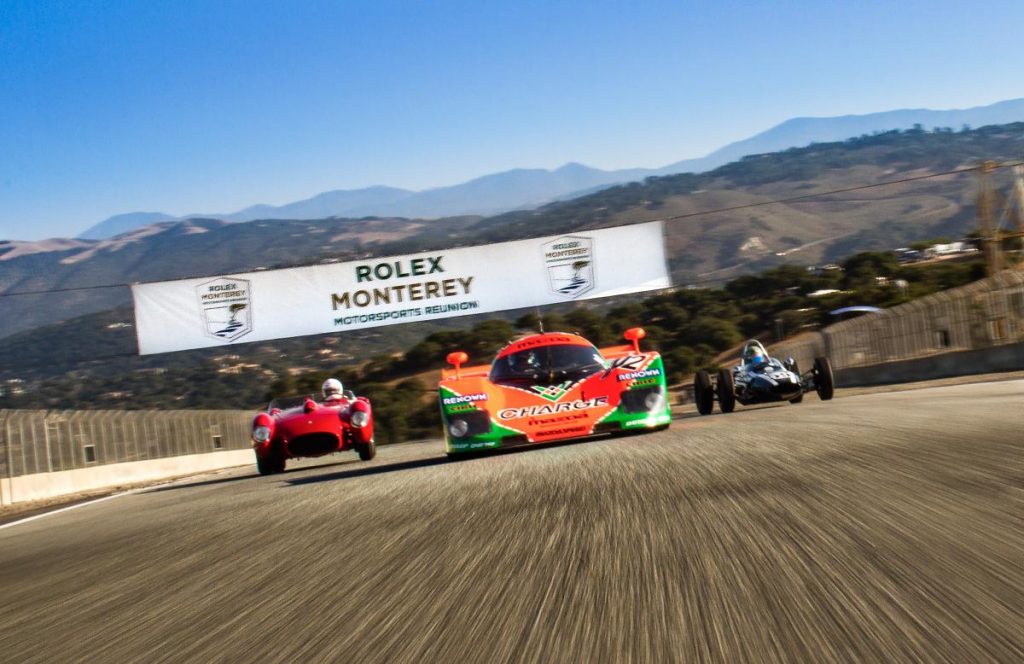