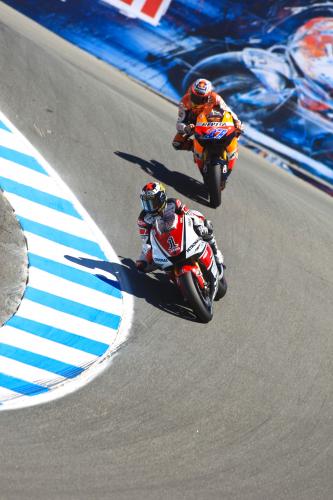 Following a hectic European race schedule, the MotoGP™ premier-class is making its way to sunny California to contest the Red Bull U.S. Grand Prix at the Mazda Raceway Laguna Seca this weekend, with Yamaha Factory Racing’s Jorge Lorenzo looking to extend his lead at the top of the championship standings.

This will be the 14th time the MotoGP field is set to race at the track, which is the shortest on the Grand Prix calendar. The circuit is known in particular for its infamous corner “The Corkscrew”, which is a challenge for the riders and their machinery, as well as an absolute viewing pleasure for spectators.

Lorenzo, who recorded a dominant victory in Mugello last time out to build up a 19 point cushion in the championship, will be aiming to continue this good run of form, and once again get one over on his nearest rival Dani Pedrosa. Pedrosa, on board his Repsol Honda Team machine, has however found his form recently and seems to be gelling more with his bike, which will no doubt put him in strong contention to challenge for the win. His teammate Casey Stoner, who struggled with the set-up of his bike in Mugello and came eighth, will be hoping for a turnaround in fortunes at the track where he won last year in dominant fashion. After testing a new, more powerful engine last week, the Australian is hoping to utilise this during the forthcoming race to help his cause.

One person who does not look to have any troubles with his machine is Monster Yamaha Tech 3’s Andrea Dovizioso, after recording his third consecutive podium in a row at his home track. The Italian will be looking to continue this run of form and mix it up once more with the factory bikes up front. Teammate Cal Crutchlow will aim to bring his practice form into a race, as the Brit has recently struggled to achieve the results he has been hoping for. He stated after the Mugello test that he has been working on his early race-pace with a full tank, and hopes to get a better start at the Laguna track, to aid him mount a serious podium challenge.

Another team looking to make big strides in the US is the Ducati Team, which will be using a new engine to try and combat the bike’s handling issues. Both Valentino Rossi and Nicky Hayden have won at the track, and will be hoping that the new improvements will let them mount at least a podium challenge, which they were close to last time in Mugello. LCR Honda MotoGP’s Stefan Bradl arrives fresh off his best ever MotoGP finish in fourth, yet will be contesting the Californian circuit for the first time. The rookie, who has already scored more points this year than any German GP rider in a single season, has however done a private test on the track with a road bike, to familiarise himself with it.

San Carlo Honda Gresini’s Álvaro Bautista will aim to put his Mugello weekend behind him as he looks to re-find some of the form he had shown earlier in the season, and not crash out of the race as he did last year. Yamaha’s Ben Spies, whose season has been plagued with bad luck, will no doubt see this as a springboard for his championship campaign. He came fourth at the track last year, and will once again look to soak up the home support for a good result. Pramac Racing Team’s Héctor Barberá will not be lining up on the grid this coming weekend, after breaking his left leg in a training accident last weekend. No replacement rider has yet been named, however Cardion AB Racing’s Karel Abraham is expected to race once again, after a four-race absence due to his hand injuries.

The CRT field will relish the opportunity to race at the short Laguna Seca circuit, as it should close the gap somewhat to their factory counterparts. Randy de Puniet and Aleix Espargaró on their Power Electronics Aspar ART machines will undoubtedly remain towards the top of the CRT pile, and will as usual face a stiff challenge from Speed Master’s Mattia Pasini and San Carlo Honda Gresini’s Michele Pirro. NGM Mobile Forward Racing’s Colin Edwards will line up with his Suter-BMW machine despite testing an FTR-Honda and BQR-FTR bike in Mugello, and will hope to put in a good showing in front of his home fans. Also racing alongside him will be Came IodaRacing Project’s Danilo Petrucci, Paul Bird Motorsport’s James Ellison and Avintia Blusens’ Yonny Hernandez and Iván Silva. US-based bike racing team Attack Performance Racing will be entering as a wildcard with rider Steve Rapp on board an in-house built, Kawasaki powered machine.

The Moto2™ and Moto3™ classes will no be racing at this weekend’s event.

Cobras Take it to the Limit

Thu May 14 , 2020
AUGUST 18, 2012 Today was the day everyone was waiting for, or at least the 30 or so thousand people flocking to the Rolex Monterey Motorsports Reunion were waiting for it:  the chance to see 45 competition Shelby Cobras charging around California’s famously challenging 2.238-mile road course known as Mazda […]