The man who inspired many of the Porsche race cars that will be on display at the upcoming Porsche Rennsport Reunion IV will be joined by the man who has one of the most significant collections of those cars as Jerry Seinfeld has been named co-Grand-Marshal with retired Porsche Engineer Norbert Singer.

Seinfeld, who will bring a number of his most-prized cars to Rennsport, was honored to be named to share the Grand Marshal duties with Singer.

“Norbert Singer is one of Porsche’s most brilliant innovators and someone I have always wanted to meet. I am thrilled to join him in Monterey for Rennsport IV as Co-Grand Marshal,” said Seinfeld.

Seinfeld’s participation is particularly appropriate as Rennsport IV is honoring the Porsche 911.  Included in his collection is the first production 911 (1964) and the last production air-cooled 911 – a 1998 993 that he bought from the factory – the last 993 to roll down the assembly line.

His collection, a mixture of street cars and race cars, includes a street-version Porsche 959 (not legal to drive in the U.S.) – one of only 200 ever built. Others include the Porsche 917K that Steve McQueen drove in the movie Le Mans, a 1959 straight-16 GT speedster; and a 1955 Spyder 550 — the same model and pearl-grey color as actor James Dean’s car.

Porsche Rennsport Reunion IV will be the world’s greatest gathering of Porsche race cars and the drivers that drove them to victory, held at Mazda Raceway Laguna Seca from October 14 to 16, 2011. Hosted by Porsche Cars North America, it will assemble the wide variety of Porsche’s most historic racing models from the nimble 550 Spyder of the mid-Fifties through the mighty 917 and 956/962 of the Seventies and Eighties to the highly successful RS Spyder of the last decade.

Special tribute will be paid to the numerous racing versions of the Porsche 911 and their countless victories on the dawn of what will become another milestone of this iconic sports car.

Thu May 14 , 2020
New Class of Race Cars Highlights Americana Motorsports “Look out, Junior,” might be the call in the paddock during the Rolex Monterey Motorsports Reunion as a group of historic Stock Cars take the grid. For the first time in the event’s celebrated history, Stock Cars with drum brakes will be […] 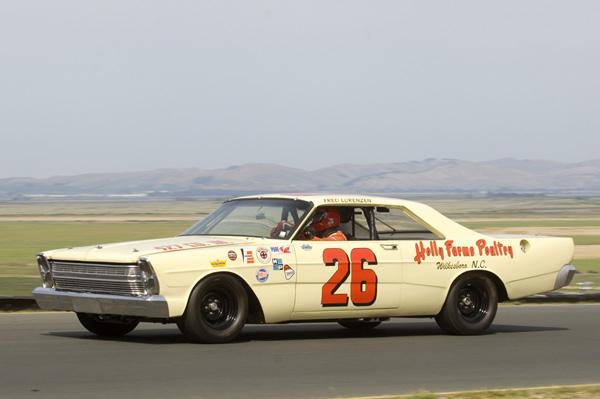