The Weekend Offers Plenty of Off-Track Thrills for MotoGP Fans

Join us in starting the race weekend as the riders from the Red Bull U.S. Grand Prix will be taking to the track early on bicycles to kick-start the race weekend. The Twilight Ride will take place on Wednesday, July 21st from 5:30 p.m. – 7:30 p.m.

Riders for Health is an international charity that uses motorcycles to save lives in Africa.  They are working to make sure all health workers in Africa have access to reliable transportation so they can reach the most isolated people with regular health care.

A live auction of MotoGP memorabilia is held on Thursday evening at the Turn 4 paddock suites from 4:00 p.m. to 6:00 p.m. This is a unique opportunity for the fans to meet MotoGP riders, purchase autographed memorabilia, and support a great cause.  Admission to the auction is FREE!  Tell your friends!

For the lucky fans that have 3-Day Paddock passes and Friday General Admission passes for the Red Bull U.S. Grand Prix, they will be treated to an exclusive Pit Lane Walk on Friday from 11:00 a.m. – 12:15 p.m.

Instead of heading back to the hotel or campsite after Friday’s practice session, we’d advise mak¬ing your way over to the Parts Unlimited Hospitality Chalet at Turn 5 for the MotoGP Fan Party from 5:00 p.m. to 7:00 p.m. The fun starts as soon as you walk through the door as door prizes include Parts Unlimited gear, Suomy helmets, motorcycle parts and accessories, G4 PowerSets, Skip Barber driving school,and more. Watch for appearances from some of your fa¬vorite AMA riders, as well as the lovely Miss Mazda Race¬way girls, and visit with fellow fans.

The XDL Championship will be held at The Depot Parking Lot, located off Del Monte Boulevard, between Wharf 2 and Fisherman’s Wharf in Monterey. Saturday’s events begin after the racing ends to allow fans the chance to see both. Tickets are on sale at www.xdlshow.com or at the show – but seating is limited so buying in advance is suggested. Friday general admission is $10, unreserved bleachers are $15. Saturday general admission is $20 and unreserved bleachers are $25. Kids 12 and under are free. The event will be held rain or shine.

Free kids crafts and activities will be available Saturday and Sunday from 8:00 a.m. to 4:00 p.m. in the Yamaha Marketplace. Activities will include painting, making magnet sculptures, creating a car and building a house.

On the Yamaha Marketplace GE Capital stage there will be continuous live action on Friday, Saturday and Sunday, including headlining band The Dirty Heads, DJ Showbiz, AMA rider Q&A’s , The Dance Band and more!
The Dirty Heads The Dirty Heads, one of the “Best New Bands of 2010” (Rolling Stone) will be performing for race fans on the GE Financial Stage in the Yamaha Marketplace Saturday at 7 p.m.  The band has aunique signature blend of acoustic infused hip-hop and classic reggae. They have been attracting attention throughout the world of entertainment, leading their music to be featured in television shows (Shark), movies (Surf’s Up, Surfer Boy), video games (Tony Hawk’s Downhill Jam) and advertising (Vestal Watches, Hurley).

A local favorite DJ will be mixing it up on stage throughout the weekend!

Topics include “ The Right Bike for Right Now” ,  “Lifelong Learning” and
“Gear for your ride”.

Ranked #8 in the United States for breakdancing, The Dance Band has been featured on MTV’s Americas Best Dance Crew, VH1’s “The Shot” and Rollingstone.com. Pushing themselves to the limit, this dexterous crew paralyzes their audience with daring tricks that combine dance with challenging acrobatics.

The top freestyle street extreme riders in the world return to perform in the Yamaha Marketplace all weekend. Presented by E3, a leader in action sports, motorsports and stunt entertainment, featured stunt riders are Aaron Colton, Kane “Insane” Friesen, Chris “Teach” McNeil and J Beats. These riders are the ambassadors, driving forces and main reasons behind the rise in popularity and exposure for the sport in the mainstream over the past few years. Colton, Friesen and McNeil have a long history of performing at Mazda Raceway Laguna Seca and J Beats will be making his debut at here.

Join the MotoGP podium festivities at 2:45 p.m. on Sunday! All spectators with a paddock pass are invited on to the track to congratulate the winners.

The iconic Italian brand returns again this year with a display featuring the latest Ducati motorcycles including the Diavel, Multistrada 1200, Monster 1100EVO and 848EVO. Additionally, a huge selection of Ducati performance apparel for men and women will be showcased in fashion shows and is available for purchase on the Island.
In honor of 2006 MotoGP Champion and current Team Ducati rider, Nicky Hayden, a silent auction will be held to benefit the Make-A-Wish Foundation.  Visitors to Ducati Island may bid on autographed, official Ducati MotoGP team gear, actual Ducati MotoGP bike parts and other unique items donated by industry partners and friends of Ducati.

Located in the Kid Zone Area of the Yamaha Marketplace
The Strider Cup™ and Strider World Cup™ events are play experiences designed to let toddlers and young kids age 18 months to 5 years old explore the world on TWO wheels. Whether it is test riding a Strider™ No-Pedal Bike for the first time or racing Striders on a dirt track with other toddlers, Strider World Cup™ events have something for every family interested in giving
their child a head start. Balance, coordination, and confidence all develop naturally when children experience group play and friendly competition on Striders.

It’s your chance to have a photo aboard the #1 Jorge Lorenzo MotoGP Championship winning M1. No need for a camera, Yamaha’s helpful staff will snap the photo and make available to you in seconds prior to leaving the Yamaha area.

Bill Dixon will show why he is the reigning XDL Champion as he takes his R6 to the famed Laguna course on Saturday at 3 pm for a high energy demo full of stoppies, burnouts and backward wheelies.

Yamaha’s Learn To Ride program allows children under the age of 12 to try their TT-R 50E and TT-R 110E in a controlled environment complete with instruction and supervision. The TT-R demos will take place Friday through Sunday from 9:00 a.m. to 5:00 p.m. in the Yamaha Marketplace.

Returning by popular demand is the SSB Yamaha Custom Showdown custom bike show. Presented by Silver Star Casting Co., Yamalube and SuperStreet Bike Magazine, the show will include Pro built bikes by many of the country’s premier Sport Bike builders as well as the 10 winning bikes of the 2011 Yamaha Virtual SuperSport Bike Show contest. A show within the show, the Yamaha Virtual SuperSport Bike Show is open until July 25 with 50 winners to receive passes to The Red Bull Indianapolis U.S. Grand Prix.

Yamaha MotoGP riders Colin Edwards, Jorge Lorenzo and Ben Spies with Yamaha legends Eddie Lawson, Wayne Rainey and Kenny Roberts are scheduled to appear on Saturday at 6:00 p.m. on the GE Capital stage for a fan question and answer session before the headlining concert by The Dirty Heads.

Sun May 17 , 2020
Record crowd celebrates 100th anniversary of BMW and much more The 2016 Rolex Monterey Motorsports Reunion at Mazda Raceway Laguna Seca exceeded expectations once again as one of the premier anchor events of the annual Monterey Classic Car Week. A record four-day total of 70,525 spectators joined in the incredible […] 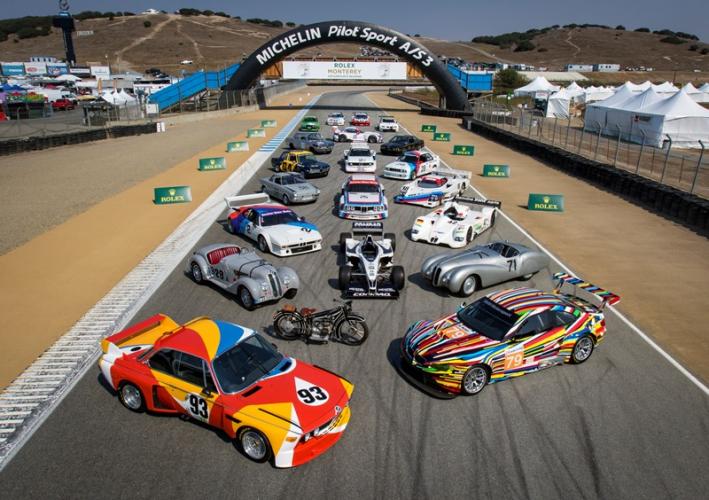