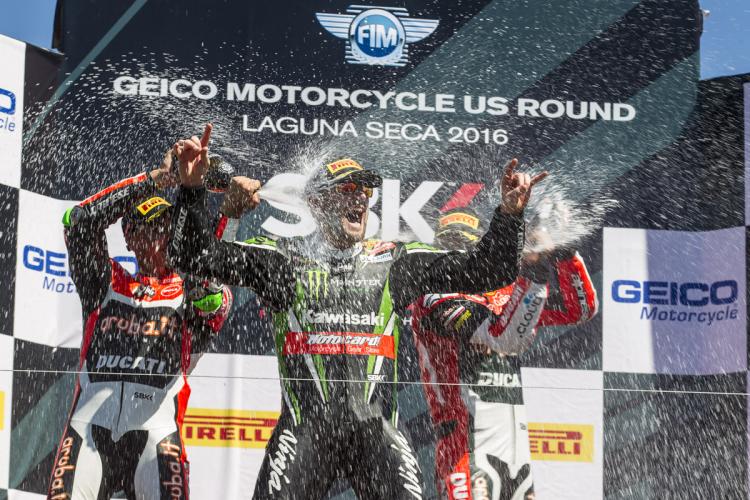 A spectacular three-day crowd of 61,052 filled the hills and grandstands of Mazda Raceway Laguna Seca to witness some of the closest and most exciting motorcycle racing ever on the 11-turn 2.238-mile road course during the Motul FIM Superbike World Championship GEICO Motorcycle U.S. Round featuring the MotoAmerica Honda Superbike Showdown of California.

Kawasaki Racing Team’s Tom Sykes took victory in WorldSBK Race 2, heading the Ducati duo of Davide Giugliano and Chaz Davies over the line in a race that would have been impossible to script.

With a slight wheelie off the line from Jonathan Rea alongside, Sykes kept the lead from pole as Davide Giugliano benefitted from P3 and slotted in behind the Yorkshireman; Chaz Davies and Nicky Hayden the closest challengers behind.

Giugliano took the lead on Lap 3, with the two Aruba.it Ducatis sandwiching the KRT pairing of Sykes and Rea, before a fall for Pawel Szkopek brought out the Red Flag. With the restarted Race set for 21 laps, the quick restart procedure soon saw bikes back on track, with Giugliano on pole for the restart from Sykes and Rea, with van der Mark able to restart, but from the final row.

The Italian lost the lead off the line to Sykes, before standing the Yorkshireman up and taking it back, with Hayden able to take Rea and move himself up into P3. The reigning Champion fought back however, and set off to hunt down the leading duo. Lorenzo Savadori was a high profile casualty soon after, as the impressive Italian rookie lost his Aprilia and crashed out on Lap 3.

An incredible tussle down the Corkscrew then saw the Kawasaki duo attack Giugliano and fight it out, before a lap later Jonathan Rea went wide at Turn 6 and ran on – out of the front-running battle as he then stopped on track with a technical problem.

The lead trio of Sykes, Giugliano and Davies ahead and away, a six bike train of Hayden, Forés, Lowes, Torres, van der Mark and Canepa battled over P4, with positions swapping and the Corkscrew hosting another classic moment as Forés took the inside line after running a little deep, and Hayden refused to be overtaken.

A three-way fight for the win ensued with the two Ducatis fighting it out in a modern classic behind Sykes as the laps ticked down, with the Yorkshireman standing firm in the face of incredible pressure from the two red machines behind. As the three crossed the line almost together after the incredible fight, last corner drama ensued for those behind, with Alex Lowes trying to take teammate Niccolo Canepa and sending both off – with Canepa able to at least see the line quickly.

In Race 1, it was Beaubier’s No. 1 Yamaha that came out on top in Superbike, besting Elias’ No. 24 Suzuki to the finish line by 0.300-of-a-second with Hayes’ No. 4 Yamaha 1.886 seconds back in third. In Superstock 1000, the No. 69 TOBC Yamaha of Danny Eslick took the checkered flag 0.534-of-a-second ahead of Claudio Corti on the No. 71 Aprilia HSBK Racing Aprilia and the No. 50 Latus Motors Racing Kawasaki of Bobby Fong.

In Race 2, the trio of Hayes, Beaubier and Elias swapped the lead numerous times, including the teammates as they exited Turn 11 on the last lap, with Hayes triumphant by 0.257-of-a-second over Beaubier and Elias third. Corti earned the Superstock 1000 victory in Race 2, with the No. 720 Yamalube Sestby Racing Yamaha of Mathew Scholtz three-and-a-half seconds back in second and Sheridan Morais third on the No. 86 Team Rabid Transit Yamaha.

Beach went wire to wire on the No. 1 Y.E.S. Graves Yamaha, taking the overall victory 6.894 seconds ahead of Frenchman Valentin Debise on the No. 53 M4 Sportbike TrackGear.com Suzuki. It was the Philpot, Ky., native’s fifth consecutive victory and brought him to within 14 points of teammate Garrett Gerloff in the season point standings.

Prince and his No. 74 Riders Discount Tuned Racing Yamaha took the checkered flag sixth overall and first in class for Superstock 600. The Bakersfield, Calif., native finished 12.050 seconds ahead of Mexico’s Richie Escalante on the No. 54 HB Racing Meen Yamaha. Prince extended his championship point lead to 126 ahead of Travis Wyman, who finished fourth in class, and 155 ahead of Escalante in third.