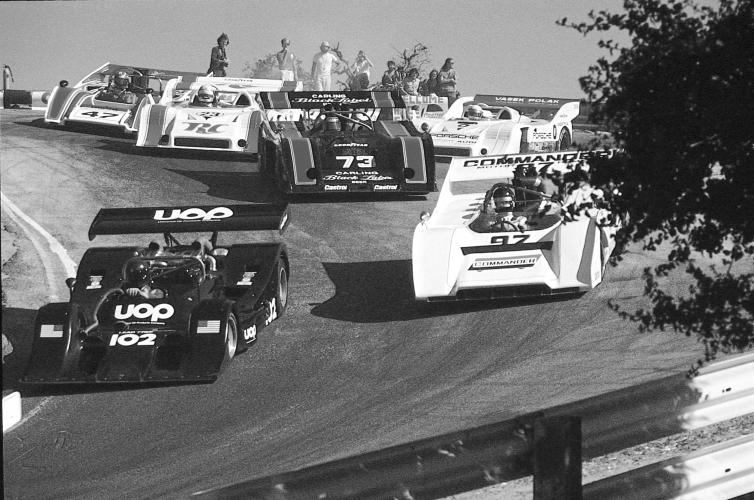 It was Rush Hour in the Corkscrew as Vic Elford goes inside with his Shadow (102) ahead of Bobby Brown, David Hobbs, Charlie Kemp, Ed Felter and Jody Scheckter in the 1973 Can-Am race. These cars and others will reunite in August.

Known for its “excess is barely adequate” reputation, the Can-Am Series was known for its free-wheeling rule interpretations that brought experiments such as big wings, two engines, ground effects, perfecting turbocharging and liberal use of exotic materials. The only hardened rule was the cars were to be “sports cars,” meaning they had to have room for a passenger. The Golden Anniversary of these over-the-top racers will be a feature race at the Rolex Monterey Motorsports Reunion August 18-21 at Mazda Raceway Laguna Seca.

Officially the Canadian-American Challenge Cup, this August’s field of Lolas, Shadows, McLarens, Porsches and others will take two separate grids of historic cars that competed in the series. The first group is comprised of USRRC and Can-Am cars that raced between 1963 and 1968, while the big bore Can-Am group features racers from 1968 through 1974.

Both groups will be on track Thursday, Friday and Saturday of the Rolex Monterey Motorsports Reunion.  And a special highlight will be a seminar and lively Q&A on Can-Am that will be presented by Victory Lane magazine.

A maximum of 550 historic race cars are being accepted for entry in the 15 race groups that will swell the paddock with rolling automotive history. Each car will be evaluated for its authenticity, race provenance, and documentation that it is period and mechanically correct from when it originally ran. From early pre-war cars like a 1916 National AC and 1927 Bugatti T37A Grand Prix, to the ground-pounding Can-Am cars.

Tue May 12 , 2020
CONTINENTAL TIRE MONTEREY GRAND PRIX Sept. 21-24, 2017 IMSA WeatherTech SportsCar Championship What: The IMSA WeatherTech SportsCar Championship moves from its recent spring date back to its traditional late-season slot on Mazda Raceway’s major event schedule, Sept. 21-24, which occurs during the official beginning of the fall season. The action among […]