Another Chapter Closes - Mazda Raceway Laguna Seca
Skip to content
Make no mistake about it.After three days of competition at the Rolex Monterey Motorsport Reunion, there were awards to be won, but they were not necessarily bestowed upon the actual winners in 16 different classes that took to the straights, curves, hairpin turns and challenging drops of Mazda Raceway Laguna Seca.In fact, Rolex Awards of Excellence were awarded in each race category to individual drivers who were determined by an independent panel to be “most deserving,” and the event’s highest “Spirit of Monterey” honor, which is coupled with the awarding of a specially engraved 18k stainless steel and gold Rolex Oyster Perpetual Cosmograph Daytona, went to the driver who, simply and elegantly stated, exceled in the spirit of the weekend.

“I don’t get teary easily, but this kind of thing will choke you up a little bit,” said this year’s Spirit of Monterey honoree John Harden of Oklahoma City, Oklahoma. “To win a Rolex timepiece and to have my name put on a placard at this track alongside some of my heroes is a big deal for me.”

Harden drove his 1963 Genie MK VIII on Saturday in Group 4A for 1960-1968 Sports Racing USRRC Cars.  His first race was in 1953 when he competed in one of the Pebble Beach Road Races, which ran from 1950-1956 through the Del Monte Forest before “Laguna Seca” was purpose-built in 1957 as a permanent race facility.  It was appropriate, he said, that where he raced his very first race should be the same place he raced his very last. At age 81, Harden has taken his racing helmet off for good, officially retiring after yesterday’s race here, where he finished a very respectable eighth out of 33 cars running in his class.

“This is very nice when you are 81 years old,” added Harden.  “You feel like you have accomplished some little thing in the sphere of what you do–it’s really something.”

The iconic Chevrolet Corvette was the featured marque at this year’s event, and the Chevrolet Motor Division was on hand to celebrate the car’s 60th anniversary in style with a Heritage Display and special presentations, while 46 authentic and race-proven Corvettes competed. They were highlighted by three Corvette Grand Sports (celebrating their 50th anniversary), of which only five were ever constructed under the watchful eye of Zora Arkus-Duntov, the “father of the Corvette.”

Learning new things about old cars was the thread that ran throughout the weekend, while visitors to the Rolex Monterey Motorsports Reunion witnessed historic race cars from nearly every era, dating as far back as a 1911 National 40 to a more modern-day 1992 Mazda RX-7 92P. All the famous names were represented, including Ferrari, Maserati, Jaguar, McLaren, Aston Martin, Porsche, Bugatti, Talbot Lago, Alfa Romeo, Ford and Chevrolet. The cars—550 of them, to be exact–were selected for their historical significance, authenticity and period-correctness and divided into classes based on type of car, displacement and era of origin.

A Cross-Section of Passion
A total of 39 pre-War cars competed over the three-day Rolex Monterey Motorsports weekend, and 10 were new to this event, proving that enthusiasm for an era in which goggles and leather helmets served as safety gear will never die.

“Preservation is just as important as restoration,” said Brian Blaine (Visalia, Calif.), while his mechanician cranked the engine on a 1911 National, which Blaine restored two years ago.   Blaine, in fact, had two Nationals at this event: the 1911, which ran in the very first Indy 500 and was the oldest car to compete here, and another from 1916, which he has been racing for 12 years. Blaine raced a third car–a 1912 Packard that he just finished restoring in May—and let his son race the 1911, while his mechanic raced the 1916. A second mechanic drove a rusty Model T around the grounds for show, and even let Jay Leno drive it on Saturday, after the celebrity asked to “take it for a spin.”

The husband-and-wife team of Dale and Karen Barry (Los Angeles) came to the Rolex Monterey Motorsports Reunion to be with like-minded “old car” enthusiasts.  He races a 1934 Morgan sports racer, while she races a 1960 BMC Huffaker Formula Junior.

“The Morgan only has three wheels, because in the ‘20s and ‘30s, England had high taxes on four-wheel cars; they were trying to force people to use railways, etc., and so these were the dominant cars on the road, because they were cheaper–significantly enough that Morgan sold 20,000 of them in a decade.” Barry pointed at another Morgan next to his, explaining that these are the last two Morgan three-wheelers racing in the western U.S.  “There are a couple back east, but there used to be about 20 of them 20 years ago.”

Karen Barry, just coming off a race, explained that her Formula Junior is a front-engine.  “All the others out there are rear engines, so I usually can’t beat them, but I’m happy with my performance today; I passed who I should have passed!”

On the opposite end of the speed spectrum were 26 magnificent Formula 1 Grand Prix cars from the 3 liter era (1966 through 1984) that took the grid today as the morning fog was just about to lift.  The cool temperatures made for slippery going, which added to the spectacle as these incredibly fast cars rocketed around the undulating 2.238-mile race course.

The race’s winner, Dan Marvin, was thrilled with the performance of the Brabham BT 44 he drove.  “This race was a dream come true,” he said.  “Great car, great track and great event. For a grey haired motorhead, it doesn’t get any better than this. When I walk around here, it is such a cool place with such wonderful cars; historically, mechanically or design-wise, there is always something new and wonderful to look at.”

The car that Marvin raced is owned by Phil Riley, one of the principals of Historic Grand Prix, which organizes these F1 races.  “It has been very gratifying to see our series become a premier vintage race series.  More importantly, it is wonderful to see all these Formula 1 cars get restored and raced.  We have 35 to 40 cars that are on our register, and for the people who were there in the days when these cars were current, they are amazed how original these cars are.  They don’t get updated; they are as they were when they were new.”

David Donohue, the professional sports car driver who won the Rolex 24 Hours At Daytona in 2009, raced a Porsche 911 in group 8B for the Weissach Cup, and had reason to reflect on the legendary career of his father, Mark Donohue, who raced in Trans-Am, Can-Am, the Indianapolis 500, NASCAR and Formula 1.

“The Trans-Am is so well represented here at the Rolex Monterey Motorsports Reunion with such a large grid, especially from the era of the 1960s and ‘70s when my dad raced in the Trans-Am,” said Donohue.  “To see five of my dad’s cars out there–four Camaros and a Javelin–is a pretty large percentage. For me, it is a privilege and an honor to see these things, but it is especially rewarding knowing that people remember what his accomplishments were and remember who he was.”

The Rolex Monterey Motorsports Reunion is an annual tradition held the third week in August during the Monterey Peninsula’s wildly popular Classic Car Week. The competitors this year were from nine nations—USA, Australia, Brazil, Canada, UK, France , Germany, The Netherlands, and South Africa.

A one-hour special on the Rolex Monterey Motorsports Reunion will air on Fox Sports 1 on October 12, 2013.

Mon May 18 , 2020
With Chevrolet’s Corvette as its honored marque this year, the Rolex Monterey Motorsport Reunion is celebrating an American sports car legacy over three action-packed days that cap off the Monterey Peninsula’s annual Classic Car Week.  A total of 45 Corvettes are racing among the Reunion’s 550 historic automobile entries, which […] 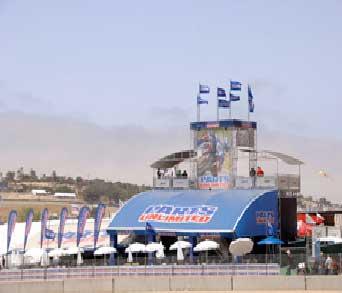